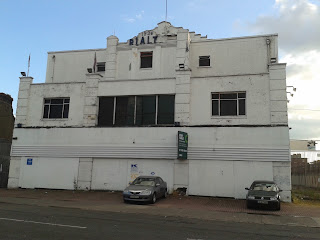 former Cinema RIALTO 357/9 South circular road, Dublin 8
Designed by Frederick James Macaulay
Opened on the 5th of November 1936 and closed on the 28th of August 1970
Auditorium of 1500 seats, single screen, balcony and cloakrooms
Parking for 200 cars
Art Deco feature with stepped motif along the roofline and on pilasters. White paint on brick-clad structure.
At its opening with the Irish premiere "Everthing is Rhythm", it offered a red plush interior for its 1500 viewers.

It was owned and managed by Maurice Baum (Dublin Cinemas Ltd) and passed to the Green Group in the 1960s.
It was sold in 1971 for 50,000 Irish Pound to Windsor Motors who converted it into a car dealership. Since Summer 2006 the building has been put up for sale with the option of redeveloping the site and will be subject to demolition. 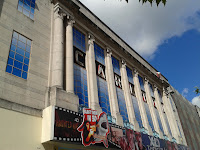 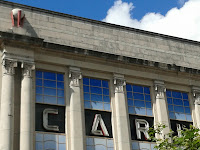 Auditorium of 2000 seats  (1500 in the stalls and 500 in the circle) , single screen, a stage, a dressing room, a cafe  and a  restaurant  (offering special meal and deals)
Art Deco features:
Stripped Classical , big vertical windows with wrought iron work, pair of torches and  the CARLTON illuminated with  a neon light.
The American-style box office with Celtic decors and the interiors disappeared. "This was in a plain Deco style, which relied on plain colored paint and on lighting for effect, but which featured two very large panels, one on each side of screen, showing styilized musical instruments in gold in a tiled type pattern of 20 tiles, five panels across and four down, with some pattern repeats.
In Feb 1957  Bill Haley and his Comets played for three weeks in their  European Premiere  "Rock around the clock".

In 1976 it was subdivided in 3 auditoriums and the restaurant converted also in 126 seats. In the 70s  horrors films were frequently screened therefore it was called the HORROR house."


Planning permission in Jan 1995 National Convention Centre and Casino and then in 2008 escaping being dismantled and relocated some distance to make way for the ill-fated 'Park in the Sky' redevelopment (retail/apart units and anchor store). The Irish Georgian Society made an appeal against Dublin City Council against the proposal to relocate a protected structure.

Former "Wendon" - Balnagowan house  , 3 Saint Mobhi Boithirin , Glasnevin, D9 - No RPS
Private house of Georges Malcolm Linzell, a Dubliner developper, designed by Harold Greenwood. It was fitted with  cutting edge technology at the time. Lately headquarter of the Central Fisheries Board from 1971.
Posted by Art Deco in Dublin at 15:40